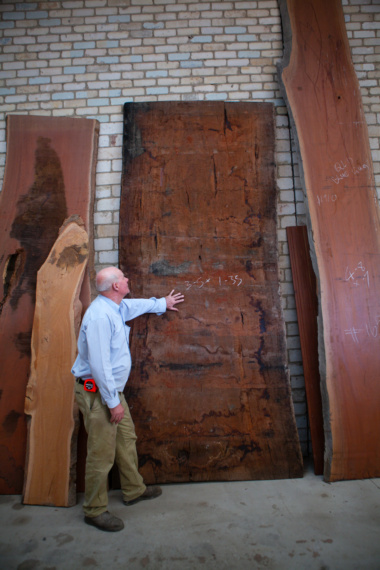 There’s something appealing about a salvaged piece of timber furniture that has been given a new lease of life. Perhaps it’s the beauty within the grain, perhaps the accompanying story that divulges its journey. The latter is surely the case for the Donchi family, who have been engrained in the timber industry for more than 150 years and own Australia’s longest serving reclaimed timber supply business.

Based in the twin cities of Echuca/Moama and with a showroom in Melbourne, Nullarbor Timber’s origins speak not only to the history of the Donchi family, but also the origins of Australia’s recycled timber industry. The family began cutting timber in an era when the affordability and durability of old growth forest meant it was one of the few building materials available, used to produce infrastructure such as railways, wharves and wool stores.

“In the early days, the family were born into it, as a family might be born into farming or blacksmith work,” says Nullarbor Timber’s managing director Brendan Donchi. “You did what your dad did and so on.”

Brendan’s ancestor Battista Donchi arrived in Australia in 1855, a ship building guru who based himself in Chiltern and whose love of Australian forests was shared by his children. His eldest son Jim was drawn to Gippsland’s prosperous timber cutting industry, one of his three sons, Pat (Brendan’s great grandfather) unsurprisingly becoming a sleeper cutter. “All those old boys working in the bush to cut their quota of sleepers often took their kids,” Brendan explains. “My great grandfather did and as my grandfather (Geoff) matured, he’d do the same thing and my father (Barry) would tag along with him and learn a lot of the old-school skills.”

Brendan says Geoff was one of the first generation of timber cutters who was forced by the efficiency of automated timber mills to find work elsewhere. He worked on oilrigs until retirement, when his unwavering passion for timber inspired him to open a sophisticated little joinery shop “He had a real understanding for timber and used a traditional method of joinery,” Brendan says. “For him it was just as much about building something to last 500 years as it was about making it aesthetically pleasing.” Geoff loathed waste and would often collect railway sleepers from roadsides, before manufacturing them into a resource or saleable item. That small salvage operation inspired Brendan’s father Barry to take it up a notch during the late 1970s early 80s – ripping out weatherboards and floors from a dilapidated house and pulling out the nails in the hope of making the timber saleable was a unique business opportunity.

Barry had tapped into a new market; people building low-cost housing who required second hand materials and those Brendan describes as “hippie environmentalists”. “That very early clientele became the backbone of where the industry started,” he says. “For someone to come up with the idea of taking the nails out of timber and turning it into something else seems pretty obvious now, but at the time it was revolutionary. And as forests became more restricted, using some old timber was not that bad of an idea.”

Recycled timber is now highly sought after, people increasingly drawn to building materials with history, character and personality. Nullarbor Timber sources timber across Australia, from the St Kilda pier, to a Port Adelaide wool store and closer to home, an old Moama wharf. For Brendan however, salvaging timber is also vital to maintaining the industry. “Timber has always been popular and probably always will be, but today access to new timber is very expensive and extremely restricted,” he says. “To use old timber is extremely sound environmentally and economically. In those early days it was just the hippies and out-there architects who might request it, but now it’s amongst the top priorities an architect will ask for.”

Will the Donchi tradition continue? Brendan and his wife Mandy (who manages the company’s marketing) have three boys, aged 12, 10 and eight and like generations before, Brendan accompanies them on little timber hunts and they enjoy visiting the mill to make a cricket bat. “I certainly wouldn’t force them into anything, but I hope they have an interest in our industry and I hope our industry is prosperous enough to give them that opportunity,” he says. “Time will tell.”