The Man Behind The Schaller Studio 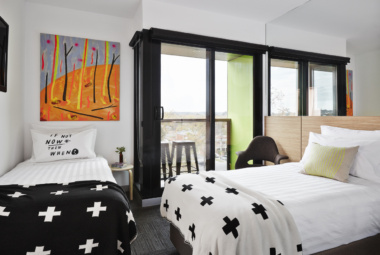 The Schaller Studio opened with a buzz of excitement earlier this year, the newest addition to the Art Series Hotels being hailed a wonderful coup for Bendigo. Inspired by Australian artists, the handful of hotels are named after contemporary greats and feature their work throughout the building. The Art Series Hotels were preceded by an artist’s safari, commissioned by hotel owners, the Deague family and attended by the likes of Archibald Prize winner John Olsen and Melbourne painter and sculptor, Mark Schaller.

Mark never imagined he would be keeping company with Olsen in the eponymous hotel stakes, however just before Christmas last year, he received a phone call that changed everything. “It was terrific, what a wonderful, fabulous compliment,” he says of the invitation to be part of the Art Series Hotels.

Mark’s career however, makes him an ideal artist to be included in The Art Series Hotel ensemble. He is a founding member of Melbourne’s artist-run gallery Roar Studio, which during the early 1980s kick started the career of many young artists and reignited Melbourne’s art scene, with a its use of bold colours and expressionism influences. Mark’s work is also exhibited in the National Gallery of Victoria and Australia.

The Schaller Studio was built bang on time, Mark joking that he hoped there would be delays so he could finish the paintings. It was a mammoth task, this Art Series Hotel the first to be filled entirely with the namesake artists’ work. Mark created more than 200 works for The Schaller Studio, the oil or acrylic on canvas paintings adorning every one of the 128 rooms, the foyers, the lobby, even the elevators. He also carved the wooden sculpture that sits outside the hotel and an eight-metre mosaic mural on the building’s façade. “It’s in a really nice part of Bendigo and has a beautiful aspect, with views of the hills all around the east side.”

Mark took cues from as many as 20 themes, including a large number on Bendigo; the races meets, its streetscapes and how he imagines the Great Stupa will look when it’s complete. He also painted a W-class tram, the mobile artwork a clever, if not curious insight into what awaits at The Schaller Studio.

Mark labels The Schaller Studio an ambitious project, which is wonderful for regional Victoria and a career highlight for him. “It inspires me to keep working and has inspired me to do other things.”