Surrounded by weeping willows and wetlands that attract native birds and wildlife, Perricoota Vines Retreat gives true meaning to the word restful. Guests at Perricoota Vines are encouraged to take advantage of the natural environment and fresh Murray River air and allow themselves to relax with the soft sounds of water lapping and birds singin 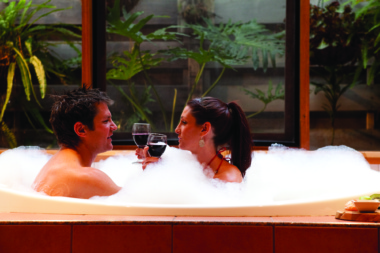 g. Perricoota Vines is a family owned and operated business that prides itself on high-end service, reflected by the number of guests who come back time after time. Developed 14 years ago by Echuca locals Barry and Jan Donchi, the retreat is now expertly managed by Barry’s niece Belinda and her husband Bill Kuluris, who each gave up a nursing career and moved from Geelong three and half years ago to take over the retreat. Not having previously worked in the industry, Belinda says the learning curve has been massive, but they nevertheless love it.

This summer, women are set to flock to Moama for the Sacred Fig Wellness Retreat. Hosted by Perricoota Vines Retreat, the two back-to-back three-day workshops will include yoga, meditation, healthy cuisine and nutrition information, designed specifically for women to invigorate and eliminate emotional baggage – and it couldn’t happen in a more idyllic setting.

Hosting the Sacred Fig Wellness Retreats is a first for Perricoota Vines, a partnership between Perth-based Sacred Fig Retreat and personal coach Dimity Bagley. It is planned to run the weekend yoga retreats four times a year, increasing to eight when mid-week events are introduced. The workshops will be set amongst the 18 acres of lush gardens, with guests staying in one of the 22 self-contained villas, all made from reclaimed timber sourced from the family’s reclaimed timber business. Perricoota Vines can accommodate up to 70 people and has wedding and conference facilities for up to 80 people, making it a popular destination for those who prefer the privacy afforded by occupying an entire venue. 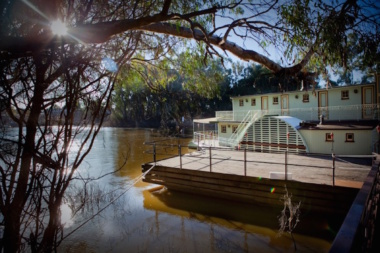 For those who like to integrate activity into their tranquility, there’s a tennis court, two picturesque garden side pools and a recreation room with table tennis and billiards. Together with the peaceful respite at Perricoota Vines Retreat, are all the attractions that nearby twin cities Echuca and Moama have to offer.