When seventeen year old Danny Kinnear grew a sunflower, he was amazed at how by putting a little seed into the ground, it became a massive flower. He then grew tomatoes and the taste of home grown fruit opened his eyes to the flavours that so many people miss with mass produced food. He says, “people have become disconnected from the real source of the food on their table”. Now at twenty eight, Danny is a young farmer trying to figure out a way that young people can step into agriculture, especially when 80% of farmer 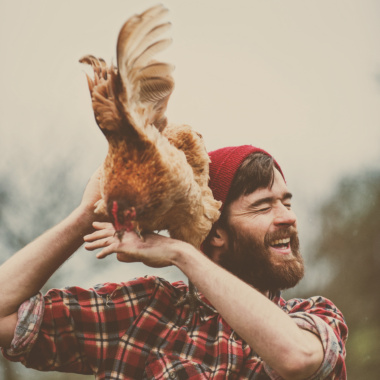 s require off farm income. Danny took the leap into the paddock four years ago with his working organic smallholding, that he hopes will one day support his dream of opening a farm restaurant using ingredients directly grown from the land.

After completing his university degree in English and Psychology, Danny travelled through Europe ‘wwoofing’ on organic properties. He returned home knowing that farming was his true passion. He started with a few alpacas, Scottish highland cattle, 3 pigs and some rather audacious chooks and a small market garden. Danny is a bit of ‘a one man band’, running the farm mostly alone, but also with the help of family and friends, wwoofers and a number of small scale farmers nearby. Soon Danny’s Farm started to take shape and along the way he discovered a passion for cooking, which also became a joy for selling fresh food directly to the public. He loved making egg and bacon wraps at Uni and thought he could sell these at markets making all the ingredients himself, but he found that it was difficult to get into places with these. Changing to egg and chorizo rolls opened the market gates for him. Danny’s sister, herself a baker, suggested he make friands as there was an opening for them. They took off like ‘hot friands’ so he added Portugese custard tarts using eggs from the farm followed by local free range pork with home made apple sauce and coleslaw. He now had his products to sell, but needed somewhere to sell them from, which has led to building his own food van. There was only one problem, he didn’t know how to weld, so he sought the help of the local Men’s Shed and learnt from the experts. He has now made a frame that will last 30 years. Danny is nothing if not enterprising. To find Danny’s markets go to – http://dannysfarm.com.au or on Facebook